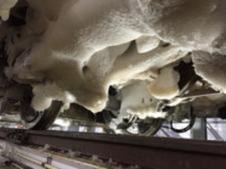 The following data is given for creating algorithms (see Download Data page for more details).

Amount of snow accumulated on the railway bogie part measured by laser scanner when the railway stops at Toyama station and Itoigawa station.

Of the historical meteorological data acquired from Meteorological Agency, we have extracted data with following condition.

※Other than the above condition, participants can use open data as long as they are free.

Data measured in seconds by anemometers uniquely set up (at 20 points in total) by JR West.

Wind direction (Instantaneous): A direction given by degrees. North corresponds to 0°, and the angles increase clockwise.

Depth of snow measured on track surface and on trench located at the outside of the railway track. Depending on the set up and measurement point of snow depth gauge, the data to be utilized may vary. For more details, please refer to [doc_1.pptx].

Track: Measured with the height of rail surface as the reference (0cm)

Trench:  Measured with the bottom of gutter as the reference (0cm)

Kilometrage: Accumulated distance from Kanazawa station, which indicates a location of station, tunnel, and each measuring instrument.

Train ID: An identifier given to each train in a diagram.

Target variable: Amount of snow accretion on the railway bogie part at the arrival of Toyama station for all railways during test set period 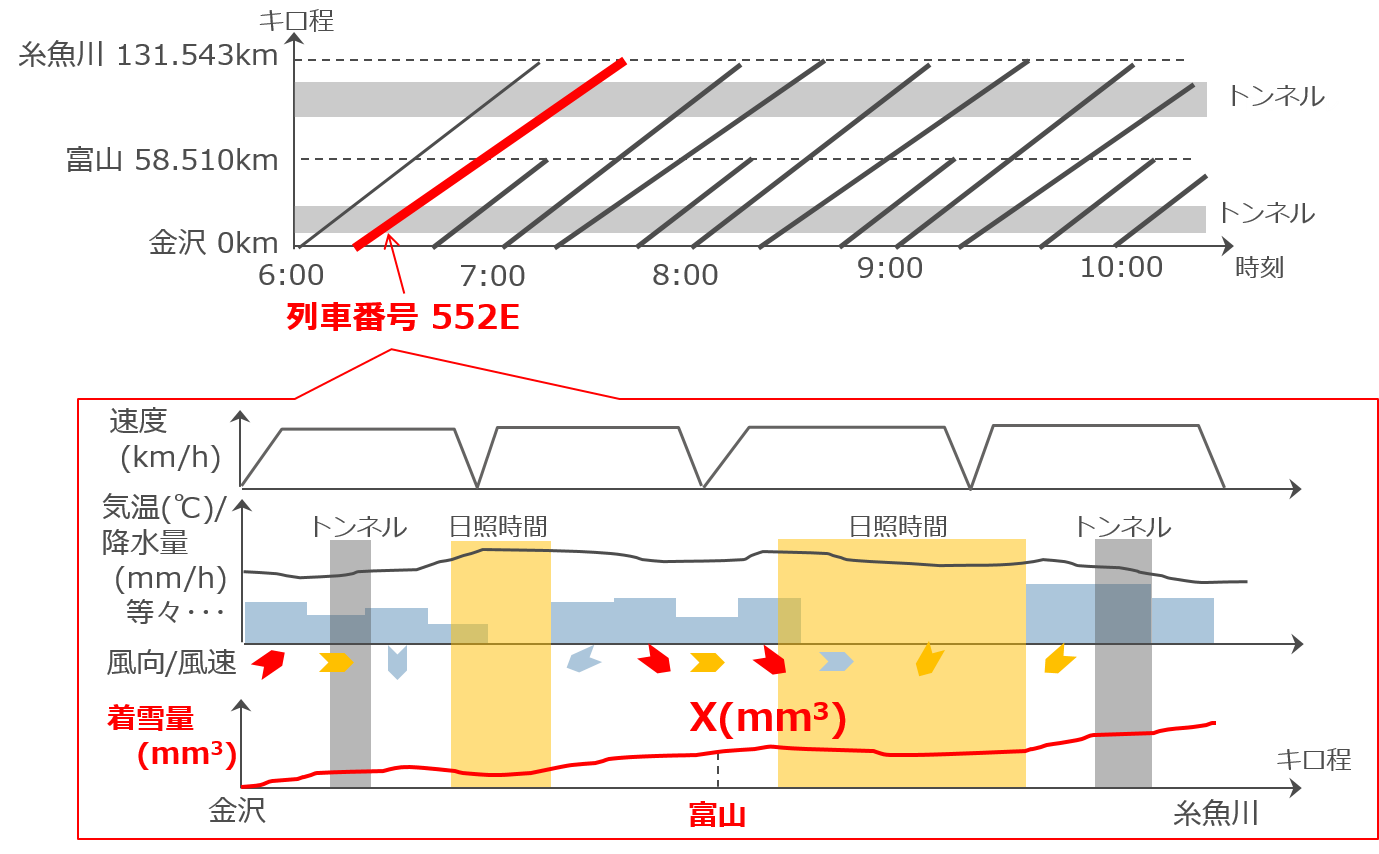 Submissions are scored on the WMAE (Weighted Mean Absolute Error).
The ratio of weights is the sum of 1 and the absolute value of the true value multiplied by 10 ^ 4.

Determination of the final rankings

1. During the competition, scores on the leaderboard are computed based solely on a fraction of the test set. We use the rest of the set to evaluate and determine the final ranking after the competition.

2. If you have the same score with the other participants, the rank will be placed on a first-submit.

Preliminary winners are asked to provide the following items:
- Model source code
- Pre-trained model
- Model documentation*1 (Execution environment, execution time**1, random seed value*2, feature descriptions and importances*3, modeling approach, insights, and so on)
*1: Give a description of each of the following parts: preprocessing, training, and predicting
*2: Specify it if used
*3: If available
- Questionnaire (motivation for the competition, elapsed time, feedbacks, and so on)

3. When a preliminary winner falls under any of the following, it will lose its eligibility to claim the prize:
- Does not respond to the contact within the prescribed period
- Unable to reproduce the result
- Does not meet the terms or rules

4. When a person is disqualified, its runner-up will be eligible for winning the prize.

Premise
Please keep in mind to create a practical model as each competition, in principle, has its own goal such as achieving business challenges, solving social problems, and sharing results of studies.

No private sharing
・Sharing code or data outside of teams is not permitted.

Data limitations
・You may use external data as long as it can be obtained for free and does not infringe any third party rights.
・In predicting y at time t, you may use the information available until time t.

Other limitations
・You may use any softwares as long as they are open sourced and free.
・Creating a predictive model by plagiarism or plagiarism of an existing research is not permitted.
・Modeling process should be divided into 3 parts and a source code for each part has to be executable independently.
1. Preprocessing
Define functions for both train and test set.
2. Training
Define functions that generate such as pre-trained model, feature importances, and results of cross validation.
3. Predicting
Define functions that generate predictions by importing input variables and pre-trained models.

Tips for modeling
Though participants can only use temperature, precipitation, wind speed, relative humidity, and weather as input data for prediction dates in this competition, we would like to introduce the ideas to estimate other weather conditions from the meteorological point of view based on these meteorological conditions (*For more details, please refer to [doc_2.pptx] on the data download page).

As a general rule, in accordance with Article 4, Paragraph 1 of the terms of participation, diclosing any contents such as insights and deliverables transmitted through the information or data provided by our company in relation to this competition is not permitted, however, only after the completion of this competition and for non-commercial purposes, it will be possible to disclose the contents within the score of the table below
Public : Posting to social media sites, blogs and source repositories, and citing to papers
Restricted : Using in a limited range from research, education to seminars, where many unspecified people cannot access

*1 Execution unit source code and learned models
*2 The insights obtained using the information and data provided, or the solutions including scripts and processed data such as summary statistics

(１)"Site" means the website "SIGNATE (https://signate.jp)” on which the Competitions are posted.
(２)"Competition" means any competition on AI development or data analysis on the Site as held by the Host.
(３)"Host" is the host(s) of the Competitions. The Host may be SIGNATE, Inc. (hereinafter referred to as the “Company”) or the Company’s client companies, affiliated companies, schools or organizations, etc. (hereinafter referred to as the “Client(s)”).
(４)"Participant(s)" means the member(s) who participate in a Competition.
(５)"Submissions" means, collectively, the analysis and prediction results and reports, etc. as submitted in the Competition.
(６)"Final Submissions" means the Submissions that are specified by a Participant on the prescribed page in the Site by the time of completion of a Competition.
(７)"Winner Candidate" means the Participant who has received a notice from the Company that he/she is nominated as a winner candidate.
(８)"Submissions for Final Judgment" means the analysis and prediction model and learning data, etc. as submitted by a Winner Candidate pursuant to the instructions of the Company.
(９)"Final Judgment" means the acceptance inspection and judgment, including reproducibility verification, by the Company for the Final Submissions and Submissions for Final Judgment of a Winner Candidate.
(１０)"Winner" means the Winner Candidate who is informed by the Company that he/she has won a prize.
２.Unless otherwise defined in these Terms, the terms used in these Terms that are defined in the Terms of Use shall have the same meaning as defined in the Terms of Use.

Article 3 Reward and Vesting of Rights

１.Unless otherwise provided for, any Participant shall satisfy the following requirements in order to be entitled to receive a reward in any Competition that offers a reward:

(１)To be a winner;
(２)To agree to transfer to the Host and the relevant transferee of rights in such Competition all transferable rights, such as copyrights, rights to obtain patents and know-how, etc. in and to all analysis and prediction results, reports, analysis and prediction model, algorithm, source code and documentations for the model reproducibility, etc., and the Submissions contained in the Final Submissions and Submissions for Final Judgment (including the rights as prescribed in Article 27 and Article 28 of the Copyright Act and the rights to obtain patents; hereinafter referred to as the "Rights");
(３)To agree that any relevant transferee of rights exclusively has the right to use the know-how contained in the Final Submissions and Submissions for Final Judgment for its own business and other purpose without any restriction;
(４)To agree not to exercise moral rights to the Rights against the relevant transferee of rights;
(５)To enter into an agreement for the transfer of the Rights with the relevant eligible transferee of rights, including the agreement to the matter in the preceding three (3) items and other reasonable provisions;
(６)To have the personal identity of such Participant verified by the Company.
(７)Not to breach any provision of these Terms and the Terms of Use.

２.Any Participant shall delete or return to the Company the Company-Provided Information immediately after the completion of each Competition.
３.Any Winner shall handle his/her Final Submissions and Submissions for Final Judgment in the same manner as prescribed in paragraph 1 hereof.
４.If there is any separate arrangement in relation to the confidential information in each Competition, the provisions of such arrangement shall prevail over the provisions of these Terms.
５.If any dispute occurs between the Host or other third party and the Company due to the breach by any Participant of the provisions of this Article and such other party makes any claim against the Company, such Participant shall compensate for any damage, loss, expenses (including, but not limited to, attorneys’ fees), lost profits and lost revenues, etc. incurred by the Company.
６.The provisions of this Article shall survive the termination of the relevant Competition or the Participant’s completion of the procedures for withdrawal from the service of the Company, with respect to the Company-Provided Information and the Winner’s Final Submissions and Submissions for Final Judgment for a period of five (5) years thereafter.

１．The Company shall prohibit Participants from engaging in any of the following acts in any Competition:

(１)An act of cracking, cheating, spoofing other misconduct;
(２)An act of directly communicating to, consulting with, making a request to, soliciting or responding to solicitation or other activities to other Participants or the Host (other than the Company) without the involvement of the Company;
(３)Any profitmaking activities using the Competition (including solicitation or scouting activities, and use for a third party in educational business, etc.) without the prior approval of the Company in writing or any other manner specified by the Company;
(４)Transfer, offering as collateral or other disposition of the status as a Participant or the rights or obligations as a Participant (except with the prior written consent of the Company); and
(５)Any other act in breach of the Terms of Use.

Article 6. Change, Discontinuation or Termination of Provision of Services under These Terms

１.The Company may modify, add or delete any provisions of these Terms from time to time without the approval of the members.

This is a forum used by SIGNATE members to exchange thoughts and ideas on data science and competitions. As your membership here is conditional, please keep in mind to familiarize yourself before joining in on discussion.


Please note that examples of any of the below may result in being removed and in that case we will record a warning against your account.


1. No irrelevant content (i.e. promotion of election campaigns or products that are not related to the topic)

3. No content aiming to cheat in competitions (i.e. posting pseudo information or leakage of confidential information)

5. Any other posts violating the terms (i.e. no duplicate accounts)


Anyone can join the forum except for particular competitions as long as you have a SIGNATE account. Please be aware we have no way to guarantee that every content in the forum is posted accurately. Remain respectful of other members and responsible for your behavior at all times.

Please do not close the page. (It may take several minutes.)